“It aint over til its over.”

Yet, with the way this year has shaped up with the Pirates’ Golden State Warrior, biometric, conservative approach to batting practice it seems as though I am going to fall short of my goal of beating 417 my career high.  This also likely means, unless Clint Hurdle leaves the Pirates and I can do some extra traveling that it will likely take two more years to get to 3000 balls lifetime.

Even with this in mind, I feel like I have been blessed with an awesome year, traveling to Miami for Marlins Park, and the HRD at GABP which led to getting premium tickets to any park after snagging two baseballs at the derby.  I cant complain, and this fantastic trip made the year even better.

Well we still look like were going to have playoff baseball which also adds a lot to the overall experience, I cant wait to see what the Pirates do and be in the playoff atmosphere again at PNC and possibly elsewhere in the playoffs.

Anyway, here is my trip to Boston and Fenway Park, I try to keep the talking limited anymore with less story and more vision.  This would be my 17th MLB ballpark.

Flying into New York over the Bronx, I was unable to get my eyes on Yankee Stadium from above..

Ive been to New York two times now, and still fell like I need about a week there to take it all in, maybe more.  Im always amazed by the size and scale of NY..

After getting situated in Beantown we settled in for some clam chowder, and lobster rolls on the bay.  Lauren and I took in a lot of the history which runs deep, from Paul Revere’s Midnight Ride to the Boston Tea Party, the Boston Massacre, Puritans and Quakers, founders of the Dec of Independence, Samuel Adams, etc, etc, etc…It takes a while if you want to see it all, the Commons Park is relaxing to hang, and the Freedom Trail is 5 miles total there and back.

I loved this picture of old and new, the Millennium Tower with the old Granary Burial Ground as a foreground.

Samuel Adams, a leader in the American Revolution…signer of the Declaration of Independence, Governor of the Commonwealth, and Ardent Patriot 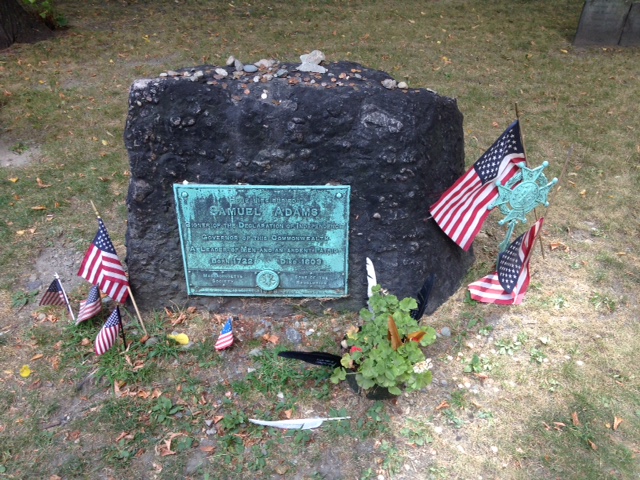 Lauren and I hanging after a good dinner at Joe’s, a place suggested by a few people to have the best Clam Chowder in Boston, I got a huge bread bowl of it…

“You can observe a lot, just by watching“

Many a game has been watched from these ancient wooden seats, not sure I could manage sitting this close to someone uncomfortably for a full game.

You might not be observing all the happenings on the field from this seat.

Fenway has also used these seats for its baseball watchers over the years.

Here is a distant skyline pic of Boston from a running trail along the Charles River. 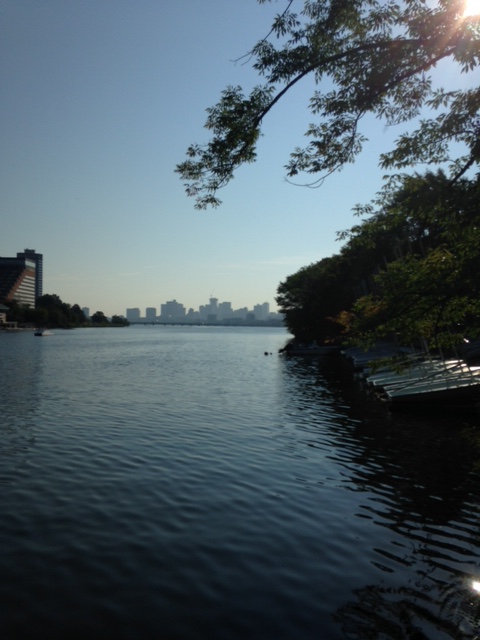 This was one of my favorite Boston skyline pics. 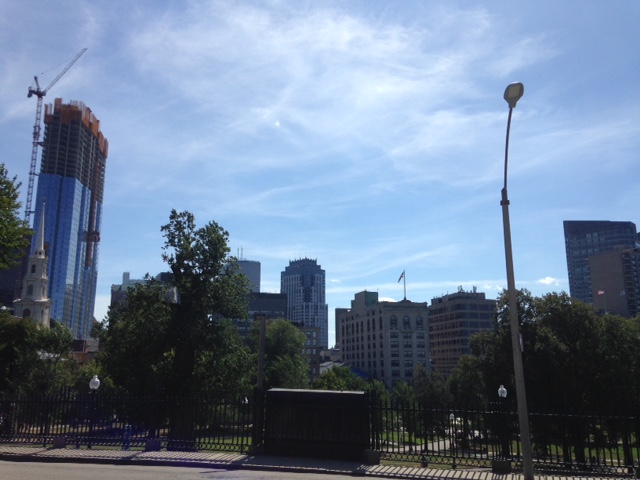 Turn around from this perspective and you would have the Massachusetts State House, with its 23 carat gold covered dome..

We took the time to tour Fenway Park which ended up helping me a lot with understanding how to get around Fenway Park, I would suggest it given its structure which has been added on in layers over time..

“You’ve got to be very careful if you don’t know where you are going, because you might not get there.”

So here are some pics of Fenway from the tour..

Red Sox logo on the field 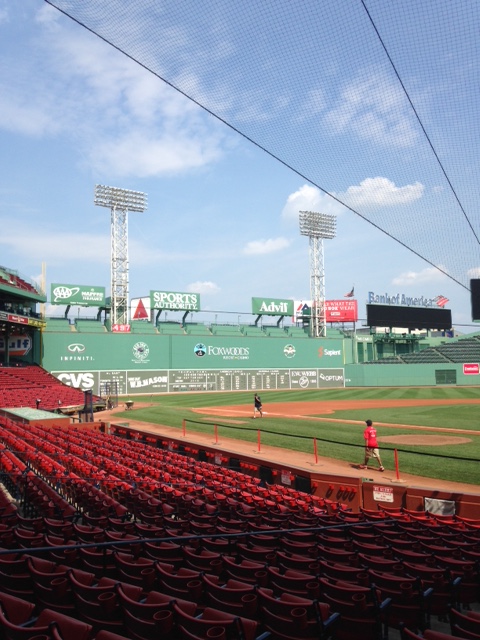 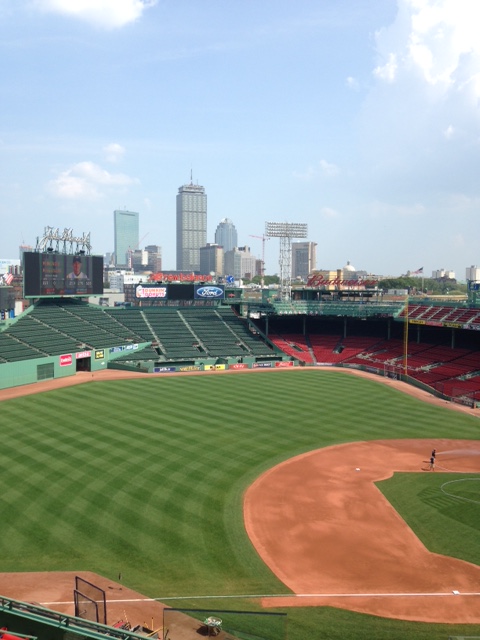 Countdown banner to David Ortiz, Big Papi’s 500th homer, Ive never been a Red Sox fan but Ive got much respect and awe for Papi who has been a clutch star for years. 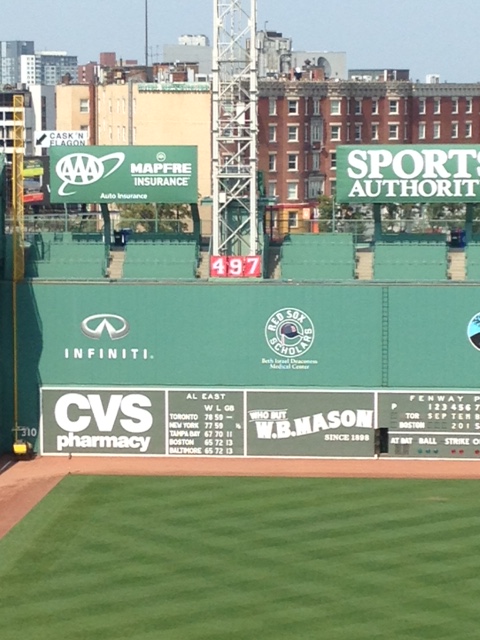 Speaking of Big Papi, here is his ride according to one of the parking attendants, it seems as though the players need to park alongside Fenway with limited parking or space for a player garage. 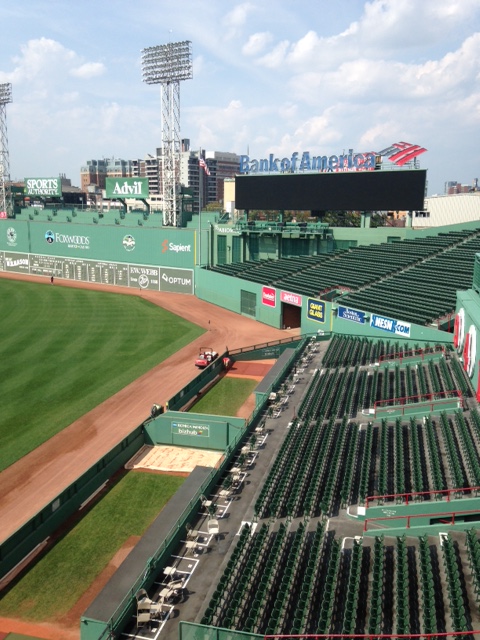 I’ve become an avid gardener of several fresh, healthy vegetables over the last two years, and continue to grow if you know what I mean, so the Fenway farms that they have on an otherwise useless roof top was pretty cool to me..

Walking around the perimeter of another MLB ballpark is always a thrill, and Fenway is surely a gem all the way around.

Home of the Red Sox, when you enter at 430 you go through a warehouse looking door…

You go through this tunnel to enter the stands which were pretty empty given the Red Sox performance this year..

“If the people don’t want to come out to the ballpark, nobody’s going to stop them.”

And through the tunnel to the inside..

I got Ball #1 on a toss up near dead center at the 420 sign, Detroit has one of these too, they are big ballparks..Detroit and Boston are very green fields. 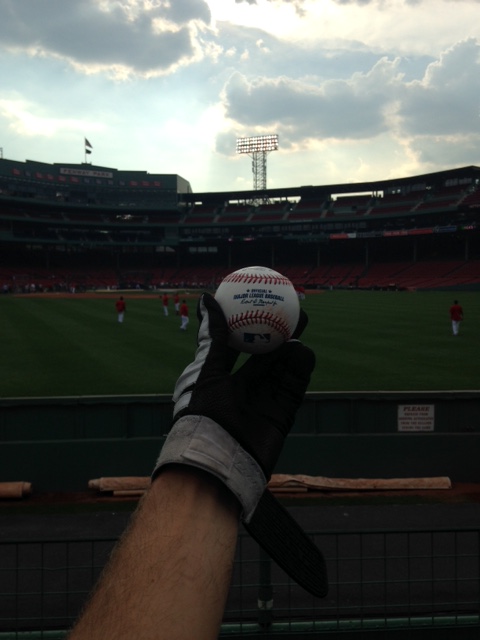 Ball #2 was another toss up from a Red Sox player unidentified and Ball #3 was a found ball up in the CF seating above when I had a moment to look around.

Ball #4 another toss up in CF, unidentified, then a toss up from Red Sox reliever Noe Ramirez in CF fro Ball #5 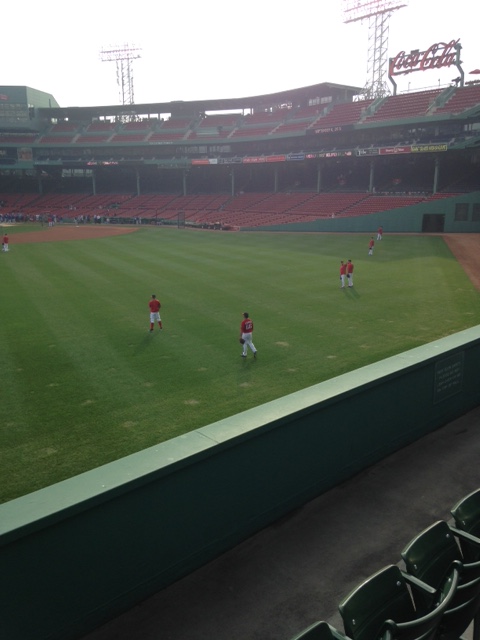 A couple of shots of the Monster from the CF angle

Almost parallel to the Monster 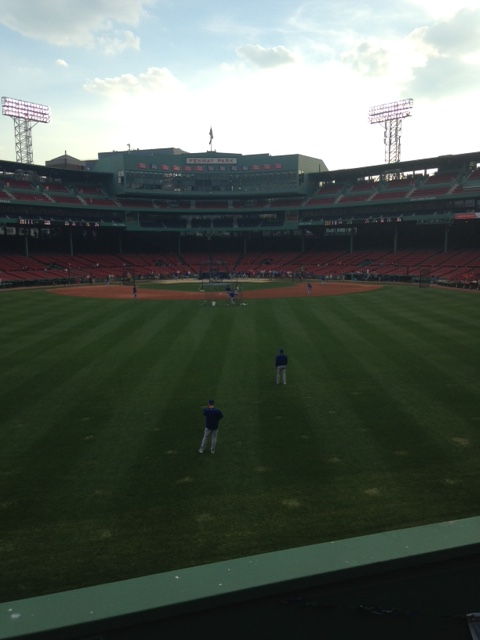 I found another ball wedged into a seat up in the CF seating area, Ball #7, and another Blue Jay toss up, Ball #8.

Ball #9 was a scrum from a deep homer that hit off this brick wall that attaches to the Monster.

Ball #10 was a caught homer on the RF crosswalk which provides nice space to roam.

Several baseballs were on the garage’s roof, but I couldn’t see a way and had a lot attendant to deal with.

Ball #2 was a baseball, one of many, tagged with a star stamp.. 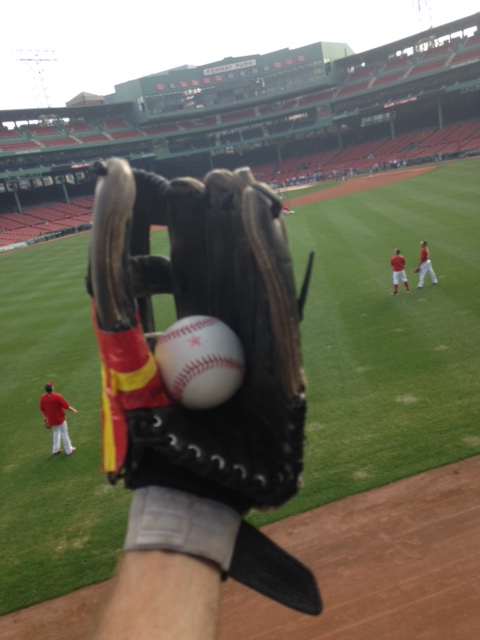 Ball #3 was a caught homer in RF, followed by a caught homer, Ball #4, on the Monster, which I was given access to one side of.  Half of it was roped off for whatever reason, my Red Sox Nation pass didn’t help.  Ball #5 a caught homer off the bat of Troy Tulowitzki.  It was cool to catch three consecutive homers in each outfield seating section of Fenway.

Ball #6 was a scrum and Ball #7 a toss up by Munenori Kawasak.

A view of the Fenway crowd 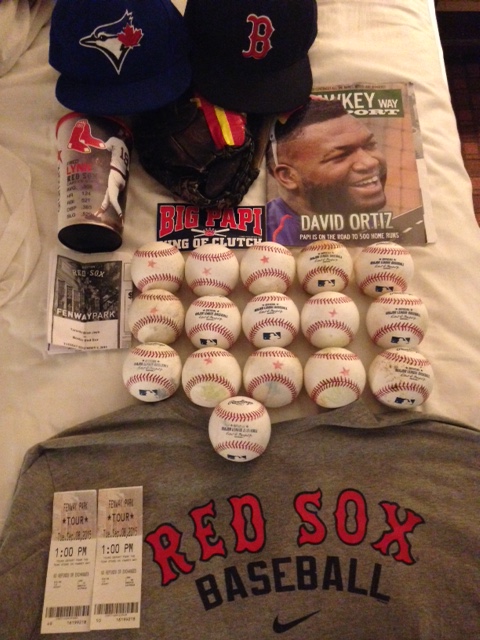